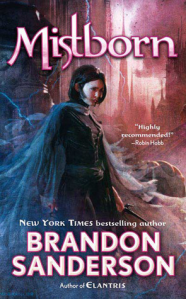 Book Review: Mistborn — by Brandon Sanderson —
Vin is a skaa, doomed to scrounge and steal for her next meal, never certain if she’ll live another day. She lives in a world where the sun is red, ash falls continuously, mists invade nightly, and very few remember when plants were green. Vin has one thing most of the suffering masses around her don’t – something she calls Luck, that allows her to see things and know things. Then one day she meets Kelsier, who rescues her and invites her to be part of his crew. For Vin, trust isn’t easy. She’s had it beaten into her by her brother never to trust anyone. Mostly she decides to join Kelsier because she’s curious, for Kelsier is no ordinary thief. He plans to kill the immortal tyrant who rules their world and overthrow the capital city. His comrades actually like and trust each other. Kelsier tells her that she is a Mistborn with incredible powers and begins to teach her about Allomnacy, the magic of metals.
I’ve read this series before, but I decided to go through it again. I am so impressed all over again. If you want to read a book with incredible world building; complex, flawed but likeable characters; great writing; and a plot with lots of twists and turns, this is the one. Brandon Sanderson is a master at his craft.