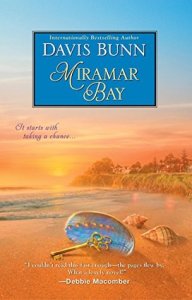 Connor Larkin is a talented actor who has worked hard to get where he is today. The only problem is, he has lost himself along the way. His wedding day looms ahead to a woman he doesn’t love, he’s deeply in debt, and he’s stuck playing the part of the bad guy who always dies. In a desperate attempt to find himself again, Connor gets on a bus and flees LA, ending up in Miramar Bay. He changes his name and begins the painful process of finding out who he is and what he wants out of life. The last thing he’s looking for is love.
Sylvie Cassick was abandoned by her mother at age thirteen. She spent her childhood living a nomadic life with her artist father, who recently died. She has been betrayed by a man, and feels she’ll never find real love. All she wants is honesty. Sylvie pours her heart and efforts into her restaurant, but lately things aren’t going so well. And then Connor walks through the door, applies for a job as waiter, and croons to her while playing old ballads on the restaurant piano.
This was an incredibly beautiful story. Its ebb and flow was almost like listening to a ballad, and the old songs ran through my head as I read. I loved the characters and was caught up in their stories. Davis Bunn is a talented writer who has given us a clean romance with a sigh-worthy ending. Five stars.