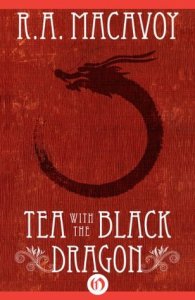 Book Review:  Tea With The Black Dragon, by R.A. MacAvoy:  Martha Macnamara flies out to San Francisco to meet her estranged daughter, Liz, who is in some kind of trouble.  When Liz doesn’t show up for their meeting, Martha is left not knowing where to turn.  Then the bartender in the luxurious hotel where she is staying introduces Martha to the mysterious Mayland Long, a wealthy Chinese man who lives in the hotel.  The bartender tells Martha that she and Long have a lot in common: they both have unique ways of looking at life, and they both love to read.  He laughs when he whispers that Mr. Long once told him that he used to be a Chinese black dragon who drank tea and loved to read.  Martha and Mr. Long become friends, and she asks him to help her find her daughter.  Then Martha disappears, and Mayland Long must rely on his intelligence, enormous strength, and his ability to understand people to sort through the clues and find both women before it’s too late.

I really enjoyed this mystery.  The magic of the dragon is there, but it’s subtle.  Mayland Long, or Oolong, is stuck in human form.  He deals with fatigue, gunshot wounds, and hunger just like any other human, yet he has the determination to keep going.  Plus, he has some special skills that help him just when he needs them.  Mostly, he is a curious, gentle soul who has searched for centuries for truth, and when he finds Martha, he knows he has found his truth.

Martha is delightful — a talented violinist who sacrificed her career to raise her daughter (which Liz resents) after her husband abandoned her.  Now she tours with a Celtic band, earning just enough to get by.  She has the ability to see the real person beneath the surface, and she is not afraid to say what she thinks.

The story takes place when computer technology was in its infancy and cassette tapes were used instead of CDs, but this only makes the book more interesting and does not distract from the story or the charm of the two main characters.