My 2015 NaNoWriMo project is called The Sea Child (working title).  It’s a YA Fantasy/Mystery.

Here’s the blurb: When their parents die in a car accident, Maddie, Jack, and Barney are sent to California to live with their grandmother in her beach house in Carlsbad.  But one day Grandma goes missing, and Maddie finds a note in her car saying, ‘Tell no one.’  She is left to take care of her brothers and pretend that all is well.  A week later, after a storm, they find a strange, beautiful girl washed up on the shore, barely alive.  She carries a sealskin and begs them to hide her, but she refuses to reveal anything about herself except that her life is in danger.  Then Grandma’s body turns up on the beach.  Maddie is named as heir to her grandmother’s wealth and property, as well as guardian of her brothers.  Maddie is determined to discover the secrets of the house which seem to be connected to their mysterious guest, but when people start pressuring her to sell the house and sinister things keep happening, she realizes that her grandmother’s killer may be after them as well. 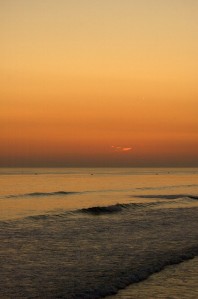