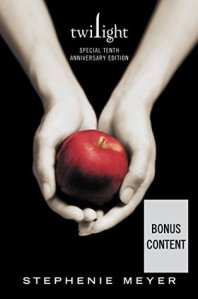 I was curious to see how Stephenie Meyer was going to pull off a gender switch up for Twilight, so I bought Twilight/Life and Death (the tenth anniversary edition) and started reading.
First you have to understand that I am a die-hard Twilight fan. I’ve read the original book over ten times. (Should I really be admitting that?) I also really enjoyed the movies, even though they weren’t as good as the books. And I loved the music in all four movies! So, I had doubts on whether this version would work.
As I began to read, Beau and Edythe slowly came to life. It was interesting to see how their personalities were different from Edward and Bella, and yet how they worked for the story. Because I knew the story so well, I picked up on all the differences. I liked Beau’s personality. Edythe was okay. I had a hard time with the changes in the Cullen family. I’d come to love each of them in the original books, and it was unsettling to find them different people. The hardest change for me was the werewolves. Wolves in the wild are male dominated, and it makes sense that werewolves would follow the same instincts. So to have Jake (my heart throb!) be replaced by Jules and a pack of female wolves… Ahhh! It just didn’t work for me.
My biggest complaint was that the plot was exactly the same (it’s hard to stay awake when you are so very familiar with it). But then Bam! A certain decision is made that changes everything and makes the rest of the book VERY interesting and fun. I liked the ending. It made sense, better than Twilight’s original ending, actually. (Not that I would want the next three books to vanish.)
So, to conclude, I enjoyed reading Life and Death. It was an interesting experiment, and I think for the most part, she pulled it off. But, please, Stephenie, write something new. I am dying for a new book from you, with new characters and a new plot.