Book Review — Conrad’s Fate, by Diana Wynne Jones
Conrad was born with bad luck hanging over him, and when his uncle tells him his Fate will catch up with him soon and he will be dead, Conrad decides to go up to the castle, Stallery Mansion, and try to change his destiny. Hired on as a servant, Conrad soon finds that someone in the castle is using magic to constantly change reality. He and another boy, Christopher (who turns out to be the Chrestomanci) join forces to try to figure out the mystery, rescue their friend Millie, and restore order once more to the magical worlds.

I really enjoyed this well-written book. The magical worlds were amazing, and the characters were interesting. I was glad to find another Chrestomancy book to add to my collection. 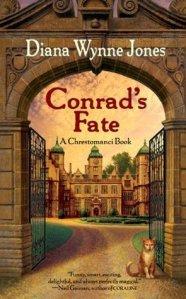