Crispin, Lord Cavratt doesn’t believe in true love. It seems that every young woman and her mother pursuing him is after his money and title, and he has become jaded. While he walks in the garden with one of those grasping females, she goads him, saying that he probably doesn’t even know how to kiss. Crispin turns to a woman that he assumes to be a servant (because of her shabby attire), apologizes, and then thoroughly kisses her. To his dismay she turns out to be a lady of birth, the niece of an angry gentleman who claims that Crispin has compromised her and demands that he marry her at once. So Crispin is forced to marry Catherine Thorndale. He assures her that he will get the marriage annulled as soon as possible.  Meanwhile, she will live in his house and be tutored by his sister on how to be refined and survive Society. Catherine is only too glad to escape the clutches of her cruel uncle and wishes that she could stay with Crispin forever. After all, he is kind and gentle. Besides, an annulment would leave her reputation in tatters. As her beauty, courage, and sense of humor is slowly revealed, Crispin begins to fall in love with Catherine, but he doesn’t recognize what he is feeling as the real thing. He assumes Catherine doesn’t love him.  Because of her uncle’s abuse, Catherine cannot trust Crispin enough to reveal her true feelings for him, and so the two of them are trapped behind their inability to talk honestly with each other. Catherine’s uncle, who is after her inheritance, keeps showing up, demanding that she leave with him. His threats become increasingly violent, and it takes Catherine being in mortal danger before the two will declare their love for each other.
I really enjoyed this Regency Romance by Sarah M. Eden.  In fact, I read it twice.  So if it’s raining where you live (as it is here), grab a blanket, curl up in front of the fire, and get ready for a sweet romance that leaves you sighing at the end. 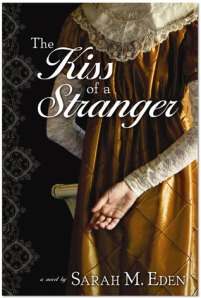